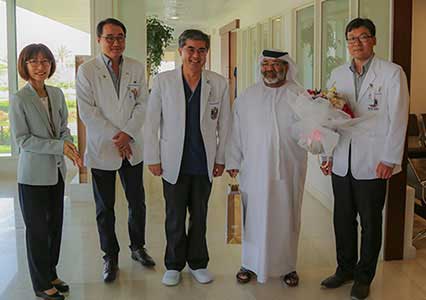 Sheikh Khalifa Specialty Hospital is the largest specialty hospital in the Middle East which has 248 beds and provides over 200 medical staff. The hospital specializes in care of patients from Oncology, Cardiovascular, and Neuroscience, and was officially opened in November 2014.

Since then it has been continuously increasing in patient registration. The number of patients’ appointments had increased as twice every month from Jan to March. On 28th April, Mr. Hassan Mohammed Salem Al Merri, who visited Neuroscience center for his neurosurgery recorded as the 1,000th new patient.

SKSH has been successfully done over 40 complicated operations including open heart surgery, CABG, laryngomicrosurgery, pyeloplasty, and laparoscopic transperitoneal. Also, the hospital is receiving loud applause and high satisfaction from patients and community.

Dr. MyungWhun Sung, CEO of SKSH said, “SKSH is committed to deliver professional services and outstanding patient care. The patients are going to receive the same quality of service and treatment abroad such as German and Korea. We continue efforts to provide premiere healthcare care services to the U.A.E patients.”

Sheikh Khalifa Specialty Hospital is a referral hospital which accepts only the limited patients through the referral system. The hospital is receiving patients from other hospitals not only northern emirates but also GCC region.