open all | close all 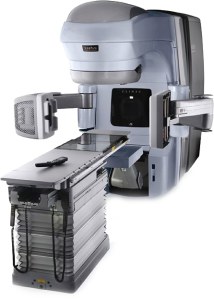 Radiation therapy is one of the major therapeutic option for cancers patients along with surgery and/or chemotherapy. With the rapid development of radiotherapy and also increased survival of cancer patients, its importance is rapidly growing.

Department of Radiation Oncology, Sheikh Khalifa Specialty Hospital Ras Al Khaimah (SKSH RAK), is the only facility one can be treated with radiotherapy. We are very happy to provide radiotherapy service here in RAK for the first time. Our team ensures that each patient receives the best medical care and also feels maximal comfort through close check-up of the patient’s condition, and provides optimal treatment in close consultation with colleagues from pertinent departments.

Radiation is delivered using linear accelerator for radiotherapy (LINAC) and we can deliver various energy and type of radiation using this machine.

What is radiation therapy (Radiotherapy, RT)?

Radiation is invisible, impalpable, and odourless. Radiation, itself, is a kind of energy that travels through space or materials, having both characteristics of a particle and a wave. During the passage of the radiation, it confers its own energy to other materials.

Radiation therapy can be used have many purposes which include curative, peri-operative (pre- operative, post-operative) for prevention of recurrence, and palliative (for symptom-relief and/or el) purposes. Symptoms such as pain, obstruction, and bleeding caused by tumors are candidates for palliative radiation therapy.

Recent advances of radiotherapy and treatment techniques enable better cancer control and improved survival rate with minimal complications. However, it is essential to receive safe and efficacious radiation therapy by consulting with an experienced radiation oncologists.

Radiation dose and duration of the treatment depend on several factors including the type of cancer, location and size, goals of treatment, and general condition of the patient. Radiotherapy is usually delivered once a day during weekdays. Depending on the actual type and purpose of radiotherapy, each session would be taken from 5-15 minutes to 1 hour. All the schedules would be explained to the patient and family members.

Radiation therapy usually done outpatient based and patients should visit the department of Radiation Oncology according the schedule of treatment.

We will provide various techniques of radiotherapy based not only on the status of disease but also based on the purpose of the treatment itself. We will give the best option to the patients who need radiotherapy according to the exact need and purpose of treatment, such approach can make improving treatment outcomes without significant increase in complications. 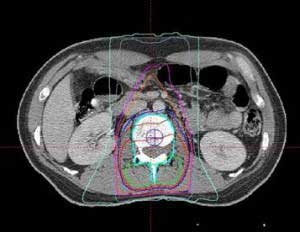 This is a basic technique using simple procedures to treat patients. It is usually used in conditions that require immediate radiotherapy or alleviation of symptoms caused by cancer. Also in some cases, the patient is not suitable condition to endure the process to simulate using CT simulator.

The simulation and planning of conventional radiotherapy are two-dimensional so that it is not sufficient to minimize the volume of normal tissue which receives radiation.

Three-dimensional conformal radiation therapy is a technique that utilizes a computed tomography (CT) image scan to reconstruct 3D images of normal organs and the tumour. Based on these images, we draw not all the target areas but also all the normal structure. After this, the angle of the radiation beam and the size of the radiation field are carefully decided by radiation oncologists according to the shape of cancer. Using 3D-CRT, it is both possible to give a higher dose of radiation to the cancer while at the same time lowering the toxicity for normal tissues.

This is a type of highly advanced 3D-CRT which usually helps protect normal tissues. A technique called dose painting, which divides the radiation field into several segments and delivers different doses to each segment, enables IMRT to reduce the radiation dose to normal organs adjacent to the tumour. For example, the incidence of dry mouth caused by excessive radiation to the parotid gland in head and neck cancer was diminished by IMRT. In prostate cancer, complication rates of radiotherapy are decreased by reducing the radiation dose to the rectum and the bladder by IMRT. 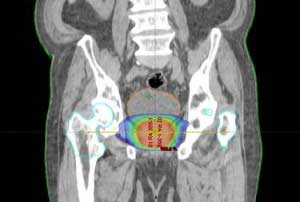 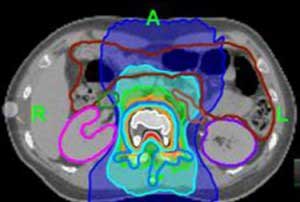 IMRT in the patients with bone metastasis

Because it takes several weeks for radiotherapy, the location of the cancer may change during the treatment. IGRT overcomes this problem by placing the cancer in the same position, comparing the simulation images and pre-treatment images. IGRT provides not only accurate positioning, but also information about changes of the cancer during radiotherapy.  In case of the volumetric and/ or positional changes of tumour, RT would be modified to overcome these changes. It is called Image-guided adoptive RT (IGART).  During the period of radiotherapy, the tumour may be shrunken and also the positional relationship with the normal tissues also be changed. Considering these changes, adoptive radiotherapy can be given with the new image and also new planning procedures. 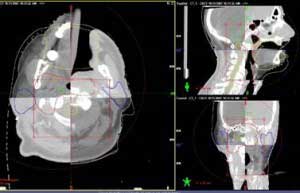 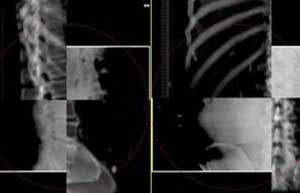 In this case, the patients with Ewing’s sarcoma had been experienced remarkable shrinkage of tumour during radiotherapy, so we changed radiotherapy plan using the concept of IGART. Such approach make it possible to reduce the complications of nearby normal tissues and also to improve the coverage of radiation to the tumour itself.

We also have image-guidance technique to overcome the inter- and intra-fractional changes of target and normal organs. EPID and OBI with kilo-voltage CT make it possible to overcome such uncertainties. Also, the respiratory gating system (RPM) and it can make it possible to irradiate more accurately to the moving target not compromising normal tissues. Such DART would be embrace the new era of radiotherapy.

SBRT is a highly advanced technique focusing high dose radiation to the tumour to destroy it. It can be applied not only to the brain but also to the body. It provides 1 to 5 fractions of high dose radiation using a high-precision radiotherapy machine. SBRT can be applied to the early stages of lung cancer, hepatic (liver) cancer, and metastatic cancer, producing promising outcomes. This technique is becoming prevalent in treating other types of cancer as well. 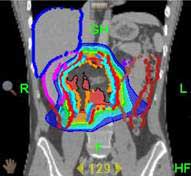 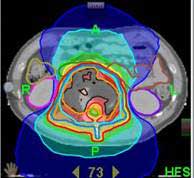 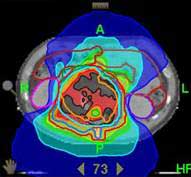 In this, Stereotactic radiosurgery can improve the local control of the metastatic lesions and also reduce the change of cognitive functions. In such case, single fraction SRS, fractionated SRS (FSRT) or Stereotactic body radiation therapy for lung cancer. 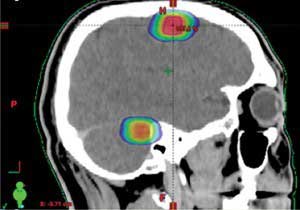 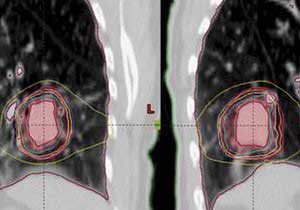 Brachytherapy utilizes radioisotopes (a material that produces radiation) to treat cancers of the uterus, breast, nasopharynx, trachea, oesophagus, and biliary tract. The radioisotope is inserted into the cavity that is adjacent to the cancer. Because brachytherapy gives radiation to the tumour at a close distance, it is possible to treat the cancer while avoiding excessive normal tissue toxicity. We will provide the brachytherapy service in uterine cervix cancer at first and then widen the scope every year.

Image guided brachytherapy (IGBT) will be helpful to predict the possibility of normal tissue complication and also the coverage of tumour. 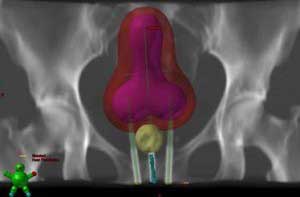 BrachyVision treatment plan for HDR brachytherapy treatment of the cervix 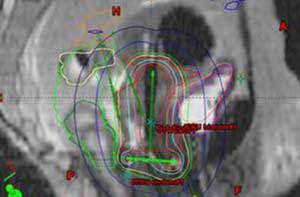 During the period of radiotherapy, the patient would meet the doctor in charge every week. Before the weekly meeting, the patient would be checked the some blood test and/or simple x-ray if needed. Such information would be notified to the patient and also the person accompanied. If there is any need for further evaluation, it will be noticed to you.

After completion of radiotherapy, the patient will be followed up according to the recommendation and also would be received work-ups. Regular follow-up is very important step to detect and manage the possible treatment-related complications and also to find any recurrence of disease.

Our team are always make every efforts to provide high-end radiotherapy to our patients. 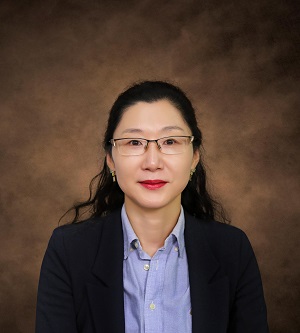 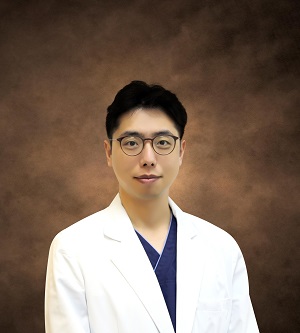